Pareidolia and the Jesus Sonogram

Pareidolia and the Jesus Sonogram

It seems like Jesus is everywhere these days. He’s even in places you might not expext him- like in toast, potatoes, hospital windows, nebulas, bathroom towels, and on a dog’s ass. This phenomenon of finding a subjectively significant image in ordinary objects is called the pareidolia effect, and it can be attributed to all kinds of randomness such as seeing the virgin mary in grilled cheese, mother theresa in a cinnamon bun, and a face on mars.

Many of these iconic images are barely recognizable and hard to distinguish on the items in which they are discovered, but they are often sold on ebay for a good deal of money. Of course, everyone knows the images (if not a deliberate hoax) are just a coincidence combining random chance and the mind’s desire to see what it wants to see. Some people, on the other hand, get excited and push their doubts aside- such as the Indians who burned their retinas looking for the virgin mother in the sun. Ouch!

We don’t know what Jesus looked like (or for certain that he even existed). The bible never described him, but pop culture would have you think that he looked like Aaragorn Son of Arathorn in a toga and sandals. However, the long hair, white skin, and well-trimmed beard are just the legacy of artists’ guesses passed down through the ages. And yet, Tequoia Smith of Loraine Ohio insists that the son of god himself appeared in her baby’s sonogram. Except, it isn’t Jesus at all. We are looking at a the femur and the tibia+fibula seperated by a patella (that looks nothing like the face of Jesus). You can find this in any sonogram of a fetus leg, and in fact, this isn’t the first time Jesus was found hanging on the cross on a sonogram photo of a knee joint.

Laura Turner also found Jesus in her sonogram. He appears hovering over the fetus of baby Joshua in the image below. 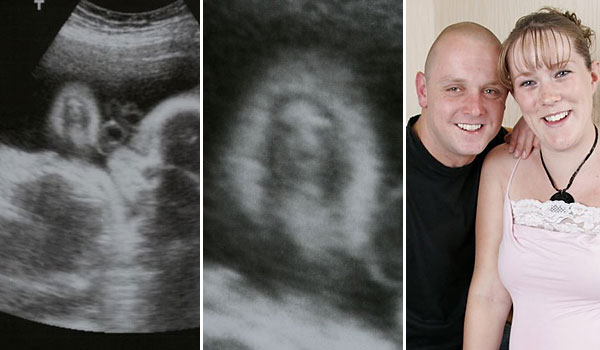 When you look at a sonogram photo, you are seeing a thin 2D slice that the sound waves pulse back to the transducer. The sonic waves are created when an electric pulse agitates the peizo electric crystals on the end of the transmitter. The crystals wiggle and create waves that pulse out six million times per second. The white part in the sonogram image is usually dense bone, and the darker parts are where the energy of the sound waves is attinuated, or absorbed and dispersed rather than reflected back. *

Little Joshua in the photo above is not being visited by the holy ghost. His arm is resting on his abdomen, and we are seeing a slice of his bent arm that is facing us. In other words, Jesus looks similar to a folded radius, ulna, and humerus, but only if you are looking straight down at a thin slice of those bones. And, only if you are easily suggestible or high on pot.

Sonograms are a great way to see if your baby is healthy. They aren’t meant to be used every day, but Tom Cruise and Katie Holmes didn’t get that message. They bought a sonogram machine so that they could see their baby every day. Some worry that bombarding your unborn fetus with sonic rays will hurt the baby, but it seems not to have done too much damage to Suri, so far as we know. Of course, in that family it’s really hard to say what constitutes a damaged brain.

Studies have shown that labrats subjected to extended sonogram sessions may have wandering neurons in their brain. The neurons don’t change function, they just wander and grow in odd places. This is after 30 minutes or more of full sonic blasts- a much longer time than the average sonogram visit, and the damage only occured in a small (but statistically significant) number of the rats.

As much as rats are used in testing, the effects shown in this study are not easily translatable to humans. A human sonogram session involves a wand moving over multiple areas, and the rat test was one flat pulse that didn’t move at all. Also, rats neurons migrate in a matter of days, while the neurons in the brain of a human fetus take several weeks. You can see how the comparison is unfair under the circumstances.

Despite the relative safety of sonograms, experts warn against using commercial sonogram companies. These businesses sell you a peanutbutter-hued 3D photo of your baby for $200, but they are using machines that are much more powerful than they’ve ever been before. Even though, in theory, sonograms don’t harm the baby, it pays not to engage in this kind of exploitation of prenatal vanity. Besides, you might be surprised what your fetus may be doing in there…

*Thanks to my friend Meredith, the best sonogram technician in the whole damn world.

**UPDATE: Amy Janer thinks she sees Jesus in her 3D sonogram too. Am I the only one who sees a baby with Hellboy stumps on his head?