It’s hopeless for me to write an unbiased review about the book Ankylosaur Attack. Primarily, because it’s written by one of my favorite skeptics, Daniel Loxton, but also because it features my favorite dinosaur, the durable battle-armored ankylosaurus.

For those who are unfamiliar with Daniel Loxton, he’s the author/editor of the Junior Skeptic column in the back of Skeptic magazine. Junior Skeptic really stands out as a brilliant, gorgeously illustrated introduction to the scientific analysis of fringe ideas such as psychics, fairies, and mythical monsters. I can’t imagine anyone else that I would trust to be as accurate about relaying scientific information to children as Daniel Loxton, and I certainly can’t imagine anyone else who could translate that accuracy into such clever illustrations.

Daniel Loxton is also the author of the truly awesome book Evolution: How We and All Living Things Came To Be, a primer for kids on the subject of natural selection. There was a bit of a pseudo-controversy surrounding Daniel’s advice to young readers that questions about religion be directed toward pastors and parents, but I firmly agree with Daniel that the topic deserved to be addressed in a respectful way. Often, non-believers shoot themselves in the foot by insinuating that atheism be the key to opening the door to science; that kind of hard-lined attitude makes people of faith feel unwelcome in the wonderful world of natural discovery and scientific knowledge. Kudos to Loxton for making science accessible to EVERYONE, as it should be.

Ankylosaur Attack is a deviation from Daniel Loxton’s previous books because it is prehistoric fiction. It offers the story of a young ankylosaur being attacked by a hungry t-rex looking for a snack. The rendered graphics are phenomenal and really help stimulate the imagination with attention to detail and lighting. The plot is simple enough for younger readers, but also helps stimulate discussion for older readers about defensive and offensive genetic traits that have evolved in dinosaurs. What do ankylosaurs and turtles have in common? If you were a predator how would you try to eat them? Isn’t awesome that this extinct animal had an armored back to defend against attacks and also a cannonball whip for a tail?

Ankylosaur Attack is the first of a series of prehistoric fiction. I look forward to the rest in the Tales of Prehistoric Life series.

As an added aside, in honor of our local museum’s life-sized model ankylosaur, I decided to donate a copy of Ankylosaur Attack to the dinosaur library at Cincinnati Museum Center. It was tempting to keep the book for my daughters (pictured above), but I thought that it would be better served as a resource for other kids visiting the museum. So, here’s a photo of the book at Cincinnati Museum Center’s dinosaur library. Hope the museum visitors enjoy it as much as my kids! 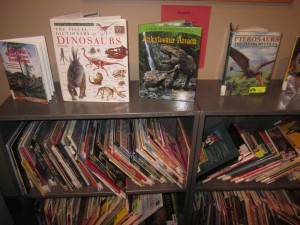